Born in Wellington in 1948, Eiko Hanshi Andy started Karate as a teenager in the mid 1960s. In 1967 he traveled to Japan to train at the Kyokushinkai Honbu Dojo in Tokyo under Master Oyama.

Even though the everyday training was gruelling and often brutal, Eiko Hanshi Andy topped the training attendance record and was awarded Shodan Black belt by Master Oyama. He returned to New Zealand with fellow New Zealander Mr John Jarvis. Together they toured the country giving demonstrations and newspaper and TV interviews on this then little known, mysterious oriental art.

Eiko Hanshi Andy had considerable success in tournaments both in NZ and Australia and in 1975 captained the New Zealand team to the 1st World Karate Championship in Tokyo.

After meeting Kaicho Nakamura, Eiko Hanshi opened his own Dojo in Nelson in 1974. Eiko Hanshi Andy reflects on this time – “Eiko Hanshi Renzie (of Christchurch) and I invited Kaicho to New Zealand. I had met and seen karate masters in Japan but on meeting Kaicho for the first time I suddenly realized what karate was about. Here was this powerful man with awesome ability the likes of which I had never seen before. But with it Kaicho had such a gentle, sincere and humble manner. It was so inspiring that I decided I wanted to do Karate full-time. So I left my job at a publishing company in Christchurch, sold my house and moved with my family to Nelson. I bought an old factory and gradually it turned into the beautiful dojo we have today.”

Since the founding of Seido Karate in 1976 Eiko Hanshi Andy has travelled regularly to New York to train with Grandmaster Nakamura. Andy Barber was promoted to Eiko Hanshi 8th Dan (Chief Master) level in June 2022 along with Eiko Hanshi Charles Martin of New York and Eiko Hanshi Renzie Hanham of Christchurch. These three gentlemen are the highest graded students in Worldwide Seido Karate. The title Eiko means ‘everlasting light’. They will be the only recipients of this particular title.

Eiko Hanshi Andy is a Justice of the Peace and has taught Government training programmes for more than 10 years, motivating hundreds of people towards worthwhile life opportunities.

Eiko Hanshi Andy is married to Sei Shihan Jane Barber (the most senior Seido Karate woman outside the USA) and they have 4 children and 6 grandchildren.

In 6 June 2016 Eiko Hanshi Andy Barber received the Queen’s Service Medal for services to karate and the community. 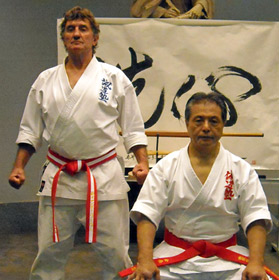