Zazen is a traditional method of meditation dating back thousands of years. Meditation is a method of quietening the mind through good posture and stillness of the body. The mind and thought process is busy and usually over active going from one unnecessary thing to another, similar it has been said to […]

For 38 years, Andy Barber has been teaching Seido karate through his Nelson dojo. Thousands of students – ranging from preschool age to people in their 70s – have taken advantage of the presence of one of the most senior teachers in the world of the […]

An interview with Hanshi Andy Barber in the Wild Tomato magazine

This was published in the Wild Tomato March issue 2010

I just wanted to thank you all for you wonderful training in 2009 and to wish you and your family a wonderful Christmas and New Year break.

Lessons from the world’s best

One of New Zealand’s premier karate masters has been a student for 34 years.

Nelson Seido karete instructor Andy Barber recently returned from the United States, where he was awarded his eighth dan black belt in Seido karate. The promotion makes him one of only four people in the […] 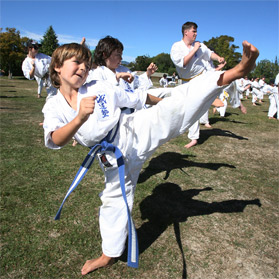 Introductory lesson
at no obligation.

You are welcome to come and observe.

The first lesson is free.

There is a beginners "Start up Pack" available that includes a uniform.